Should Buyers Hold out for the Wave of Foreclosures After the CARES ACT Forbearance Programs Expire on June 30th?

Alright, peeps. This is the second time this week I have been asked by a buyer if they should prolong buying a home until we see that flood of foreclosures hit the market after the mortgage forbearance programs end on June 30th. Shouldn’t buyers wait to purchase when the real estate market crashes?

The short answer is no, but do not worry, I am going to get into it below if you want a longer answer.

I know where buyers are getting this information because I have been seeing a lot of articles too with many industry analysts forecasting a looming “tsunami” of foreclosures on the horizon.

“A wave of foreclosures is likely coming that will hit low-income homeowners. As of August, over 10% of the eight million single-family mortgages backed by the Federal Housing Administration were delinquent by more than three months.” – Michael Strain, Bloomberg

“When the tsunami of foreclosures finally hits the markets, prices are going to plummet again ⸺ just like they did in the 2008 crash ⸺ and many folks nationwide are going to find themselves once again in a negative equity situation where it makes more sense for them to simply hand the keys to the bank than it does to continue making payments. This will exacerbate an already bad situation; again, just like it did in 2008.” – Jay Atkinson, Forbes

It is true that millions have lost their jobs permanently during the pandemic, so it would be safe and obvious to assume that we will see some future foreclosures, so why am I not forecasting a wave?

1. Many home owners entered the forbearance program out of caution and not actual need. Spring 2020 was a scary time for many, including me. I did not expect to sell many homes last year at all. Many were scared they were going to lose their job. When these current mortgage forbearance programs originated, they were advertised as “no penalty” programs and did not require borrowers to show proof of hardship. Why not exercise caution and enter the program just in case of future job losses? I think many chose this option as the safest route and did not actually need the help.

2. In fact, many defaulters have had their loans reinstated and are already exiting the program. According to the Mortgage Bankers Association (MBA), about 2.7 million U.S. mortgage borrowers, or 5.5% of the total, were in forbearance programs as of January 3, 2021, down from the 8.6% peak in June 2020. While experts assumed the millions who entered the program would eventually go into foreclosure, that just has not been the case.

3. Banks are being more flexible with repayment plans. In the past, if you were in forbearance, and you came to the end of that period, a balloon payment might be expected to reinstate your loan. Many banks have learned from the last mortgage crisis and are not operating like this anymore. Many are just adding the missed payments to the end of the loan period, which is a lot easier on strained homeowners.

4. Loan quality is a lot higher today than in 2008. Prior to the pandemic, foreclosure and unemployment rates were at all time low levels. Gone are the days of reckless lending and stated income. If you want a home these days, you are going to be well qualified. Well qualified mortgagors do not tend to go into foreclosure.

5. Industries where job losses have been high tend to have hourly wage employees with lower homeownership rates already. A lot of people who lost their jobs were concentrated in a handful of industries —tourism, hospitality, retail, restaurants, travel. The majority of home owners have not seen the job losses that could have accompanied this pandemic, so they have been able to afford their mortgages.

6. The money keeps coming in. How many stimulus checks have I received now? I think we are going on three stimulus checks, PPP loans, EIDL Advance funds, etc. There has been help for people struggling to keep up with their mortgages.

7. Low inventory levels, low interest rates, and a lot of equity. To me, this is the biggest factor I would use to predict how many foreclosures we will see. With housing inventory being at rock bottom levels, and interest rates increasing the demand, why not just list your home for sale instead of going into foreclosure? With price appreciation alone increasing 10% in 2020, maybe refinance and take some money out of the house to stave off a disaster? There are more ways to avoid foreclosure in 2021 than 2008.

“With enough equity, a homeowner has the option of selling their home, or tapping into their equity through a refinance, to help weather the economic shock. It is a lack of sufficient equity, the second component of the dual trigger, that causes a serious delinquency to become a foreclosure.” – Odeta Kushi, First American Economic Center

ATTOM Data Solutions released this chart below which predicts how many foreclosures we might see some time later in 2021. I think the middle and best case trajectories are most probable, but with less than one month of inventory currently for sale, I think the market will be able to absorb these foreclosures easily. Time will tell for sure, but you will not catch me waiting for a wave this year. 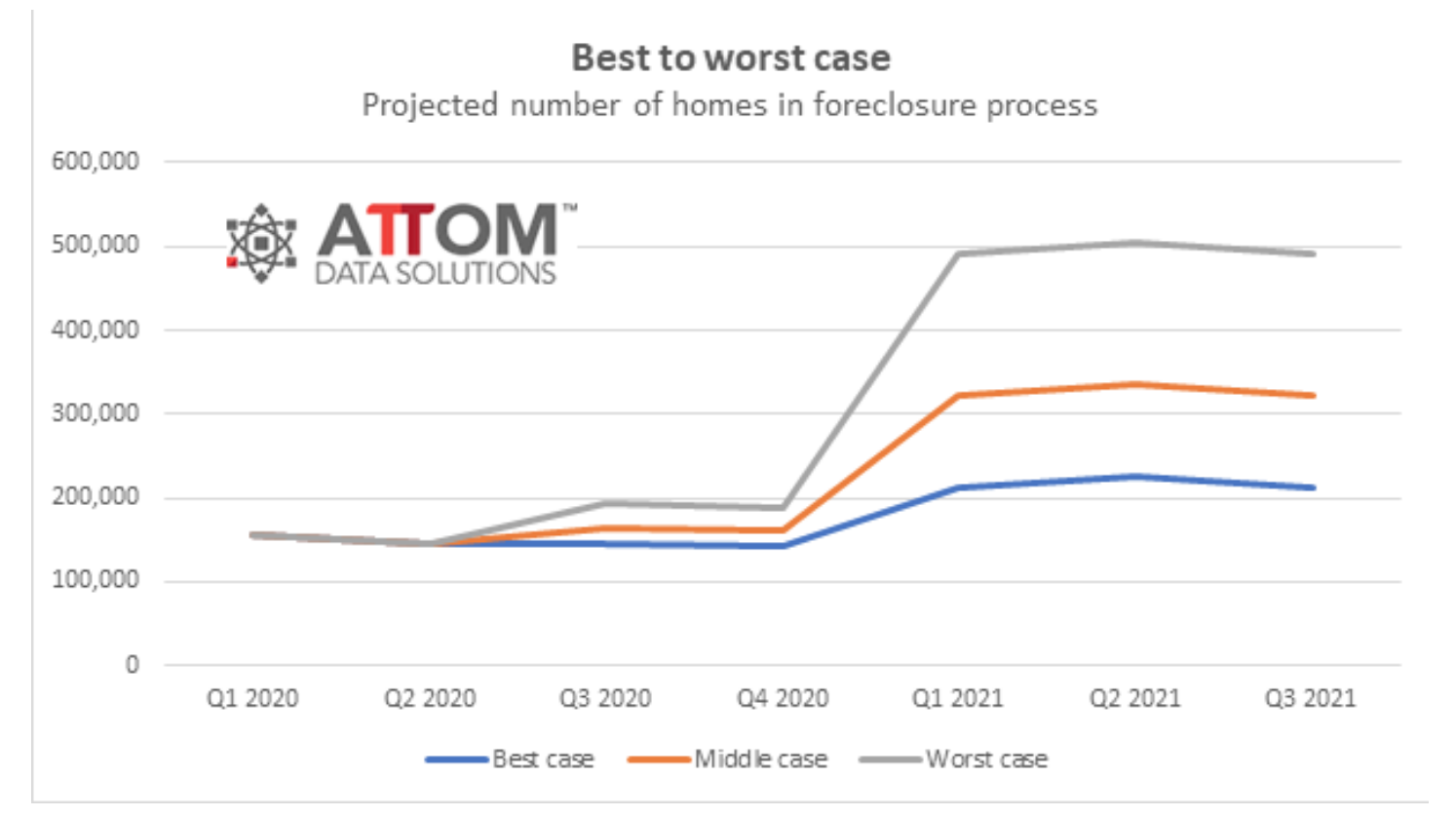